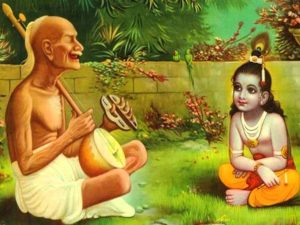 Surdas was a 16th-century blind Hindu devotional poet and singer, who was known for his lyrics written in praise of Krishna.They are usually written in Braj Bhasha, one of the two literary dialects of Hindi.

Surdas is usually regarded as having taken his inspiration from the teachings of Vallabha Acharya, whom he is supposed to have met in 1510. There are many stories about him, but most consideringly[clarification needed] he is said to have been blind from birth. He is said to have become foremost among the poets the Vallabha Sampradaya designates as its Aṣṭachāp (eight seals), following the convention that each poet affixes his oral signature called chap at the end of each composition.