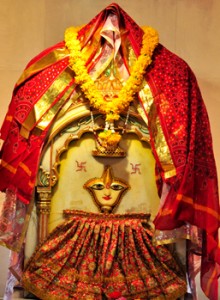 Shri Ranisatiji was born as the daughter of Gursamal in the village of Dokua village in Haryana. She was named – Narayani. Tandhan took birth in Hissar as son of Jaliram, the Diwan of the Nawab of Hissar. Tandhan and Narayani got married. Tandhan was in possession of a beautiful horse which was being eyed by the son of Nawab of Hissar from quite some time. Tandhan refused to hand over his precious horse to the nawab’s son. The nawab’s son then decides to forcefully acquire the horse and thus tries to rob it from Tandhan’s stable in the dead of night, hearing the neigh of the horse, Tandhan threw his spear into the haystack to thwart the thief, not knowing who actually it was, and the son of the Nawab dies instantly. The Nawab was after Tandhan to take revenge.

Long after their marriage Narayani with Tandhan left Dokwa and on the way the Nawab challenges Tandhan for a combat. Tandhan fightsthe battle bravely but is killed on the battleground in front of Narayani. Narayani symbolic to female bravery and power fights with the king and kills him. She then commanded Ranaji (the caretaker of the horse) to make immediate arrangements for the cremation of Tandhandasji and she as a devoted wife declared her intention to become Sati. Narayani Devi sat on the pyre with Tandhandasji on her laps and the pyre ignites solely by the power ofthe Sati, that is, by the inner heat of sat, the force of virtue at her core. She further directs that the urn containing the ashes be placed on the back of Tandhandasji’s horse and let the horse roam and wherever the horse shall stand, the ashes be placed there and a temple be built. Ranaji playing a vital role in fulfilling her wish to be sati with her husband is then blessed by Narayani that his name will be taken and worshiped along with her name and since then she is known as Rani Sati.