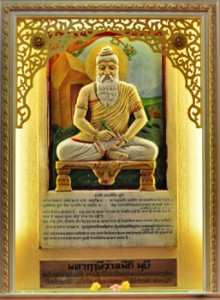 When man abandons falsehood and becomes a devotee of truth, then, at an appropriate moment, all the powers which already exist in him come to light by his strong devotion and astonish the whole world. This is very evident in the life of Valmikiji – He used to recite the name of Rama as Mara but, with his strong devotion he was blessed with all knowledge even without going to school and he eventually acquired godly powers. Once , he was going to take a bath in the Tamsa river with his disciple Bhardwaj. Enroute, he saw that a hunter had wounded and killed with his arrow one of a pair of mating birds.