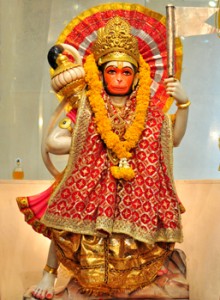 Atop the Rishimook mountain, there lived a monkey king named Kesari. His wife’s name was Anjana. In order to get a son, she worshipped Lord Shiva with great devotion. Lord Shiva was pleased and asked her as to what it was that she wanted. She begged Lord Shiva to bless her with a son as strong as himself. Lord Shiva granted her wish and prophesied that his eleventh manifestation would be bom as her son. In due course, on a full moon Tuesday in the month of Chaitra, a son was bom to her who was named Shri Hanumanji.

The monkey-face of Shri Hanumanji gives us the following lesson: To gain popularity, it is not necessary for one to possess a beautiful body. What is more essential is to do good deeds – selflessly serve one’s master and others too. A handsome man is not necessarily a good one. So he may not always win the hearts of others. To become a good devotee, one must possess, apart from physical beauty, more importantly, good qualities. Hence, in order to be well-liked, loved and respected by others one must selflessly serve others and help those in need.

Hanumanji got his self-confidence from Shri Jamvantji’s preachings. In the same way, we can become self-confident by reading the Vedas and other holy scriptures, and by following the preachings of the learned gums. Only by being self-confident, can we triumph over difficulties and attain the divine mother Sitaji, who is supremely bountiful.

On reaching Lanka, Ravana’s capital city, Hanumanji was initially captured. Many demons and devils surrounded him. But, he did not lose heart. He kept his faith in Lord Rama and using his wit and self-confidence managed to defeat all of Ravana’s demonic powers. Like Hanumanji, we too, can be successful in our endeavours if we use our intelligence and keep firm faith in God.

In some pictures, Hanumanji is shown carrying a mountain in his left palm. The significance of this is : As Hanumanji flew far and brought back the Sanjivani Mountain and thus breathed new life into Laxman, so also, if need be, we must be always ready to undergo all sorts of troubles to help our loved ones in times of difficulty. Only then do we become worthy of Lord Rama’s divine blessings.